The Ultimate Halloween karaoke playlist to spook your guests

25. Oktober 2021
Are you running out of ideas for your Halloween party? Have you thought about singing? Get inspired with our Halloween karaoke playlist!

Classic Rock for a Classic Halloween!

You want to become a Rock’n’Roll zombie with a leather jacket and motorcycle boots? Let’s start your engine and reach the Highway to Hell with tracks like Marilyn Manson's "Tainted Love"!

You've probably heard the famous "Come And Get Your Love" in the Guardians of the Galaxy movie soundtrack! "The Witch Queen of New Orleans" from the same band, Redbone, will put you in a groovy mood, with a hint of 60's nostalgia. This dark baba-cool atmosphere is definitely inspiring for a costume!

Lady Gaga calls her fans « little monsters », a scary-oke is always a good opportunity to invite your own monsters of friends to invade the dance floor. Get those hairy paws moving with David Bowie's "Magic Dance"!

More of a late 2000s vibe? Let’s sing and dance on Rihanna's "Disturbia" to bring a weird and wild ambiance to the room!

An alternative Halloween, to cultivate your underground side

Do you dream about partying at the CBGB, the Talking Heads' favorite club? What the venue would looked like on a Halloween night? It’s time to let those "fafafafa" out from to the famous "Psycho Killer" song written by David Byrne and released in 1977.

On a more contemporary note, we can also recommend "Emperor's New Clothes" by Panic! At The Disco, which stages a slow transformation from human to devil.

With tracks like Frank Sinatra's "Witchcraft" or Dusty Springfield's "Spooky", you will make sure to cover the chic classics! Elegance doesn't necessarily mean rigidity, like the flowing rhythms of these tracks, suspended between jazz and bossa nova, keep it subtle.

For a 50's mood, the soundtrack "Agatha All Along," heard in the ‘WandaVision’ show do the job and make sure everyone gets the reference. After all, you could try a retro Halloween next year...

Blues and soul have joined the party, so enchant your friends with the well-known "I Put A Spell On You," originally written by Screamin' Jay Hawkins and later covered by Annie Lennox.

Singing is a magical power, a dark energy that possesses our souls and makes our bodies get up from our chairs and the ideal song to match this energy would be "Bad Moon Rising" by Creedence Clearwater Revival. Bad moon, but a good evening ahead of you!

All you have to do is grab the microphone and bewitch your guests. Check out our entire Halloween party Karaoke playlist ⬇️ 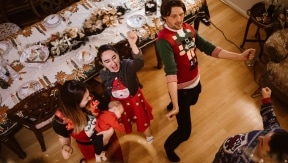